That is our philosophy: Quality Intelligence takes pride in getting it right but is prepared for the reality that this cannot happen 100% of the time. A statistical process with a standard deviation of 0 (i.e. a zero probability that you get it wrong) means you cannot sample, but have to test every single nut and bolt – a practical impossibility if you want to actually manufacture anything at scale.

With recalls on the rise – and rising steeply in the automotive and food industries – the likelihood of serious reputational and financial damage increases. This is why manufacturers are ramping up investment in Quality Intelligence maturity.

Getting to the core of the issue

AlisQI Quality Management Software (QMS) is set up to be as tenacious in getting to the root cause of an error as it is in preventing those errors from occurring in the first place. It is this corrective aspect of our system that we wish to highlight in this blog.

A complaint comes in

Below is the screenshot of a (fictitious) product complaint registered in AlisQI. This is a crucial first point to make: if you do not have a QMS, the complaint will go – well, where exactly? In a PDF form or Excel spreadsheet sent as an attachment in an email, part of a Gmail “thread” or “conversation” perhaps? This is actioning an error with an error-prone approach. Good luck with that.

Back to the systematic reporting and actioning of a complaint in AlisQI. 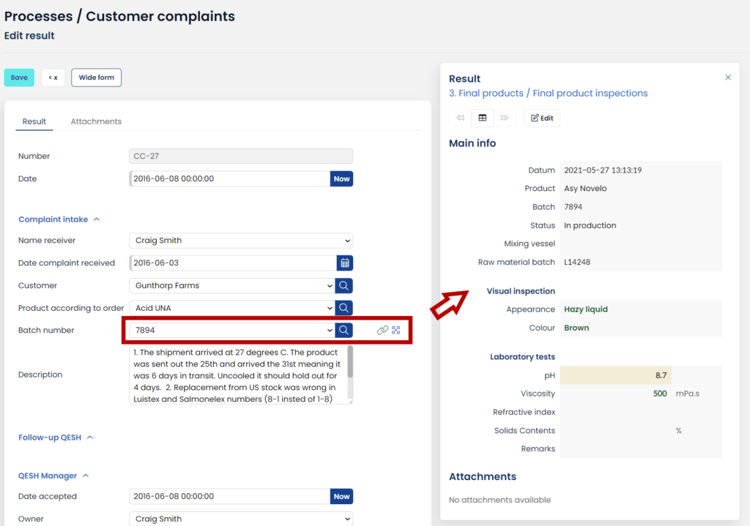 With a pH content of 3.2 rather than the in-spec range of between 7 and 9, this product will have left a very sour taste indeed. As we can see from the report, the deviation was spotted on the production line because sugar was added to get the batch to an acceptable level. Yet still a non-compliant product was delivered.

Getting the facts right

What is important in the first instance is to get the right documentation which in AlisQI is linked to the batch number. Manufacturers with a self-built system in Excel also make this link of course, but even if a batch search yields the right and complete information, it is still not part of the complaint.

In AlisQI the documentation is found instantly and becomes an automatic and actionable part of the complaint. Note that we know where on the factory floor the incident occurred (Mixing vessel MV 10) and that as the batch was released for sale, its pH must have been in spec. Mystery. Responsibility for handling the complaint has not yet been assigned; the owner field is blank.

This is the next step. Once the complaint form is saved, a message is sent automatically to the QESH manager according to a pre-defined workflow – and not because someone decided to pick up the phone, write an email or raise the matter with QESH in the course of a rushed Friday afternoon meeting.

The QESH manager assigns an owner who goes to the QESH report (in just a few clicks) to reconstruct events for the root cause analysis as shown in our second screenshot. 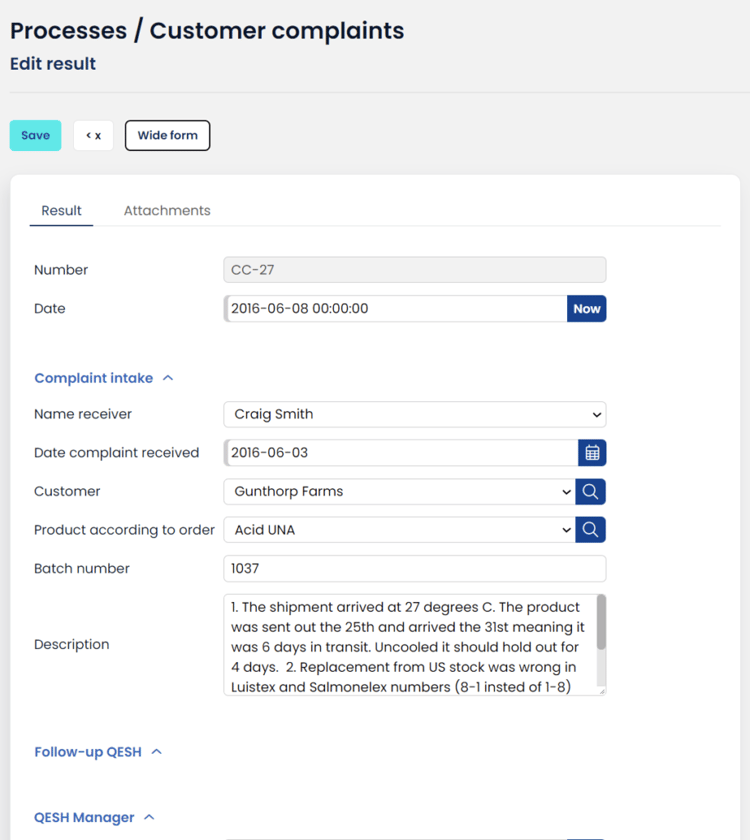 Finding the root cause

It turns out that the second sample tested – and found to be correct – was not the sample shipped out to the customer. How come? The operator had mixed up the two samples. Why? Because the computer crashed and labels had to be created manually. Manual processes are very vulnerable to error, we get that, but what caused the computer to crash? It runs an old unsupported version of Windows. For what reason? The datalogger program does not work on later versions.

This sequence of events shows why Quality Management processes cannot be ad hoc: because life itself is ad hoc and unpredictable.

The details of what happened just before noon at Mixing vessel MV 10 on September 18, 2020, would have been difficult to piece together from Excel, email and witness statements after the event. Fortunately, they were systemically logged into AlisQI, making it easy to trace the error back to its root cause(s).

Correcting these is the next step, and our next screenshot. 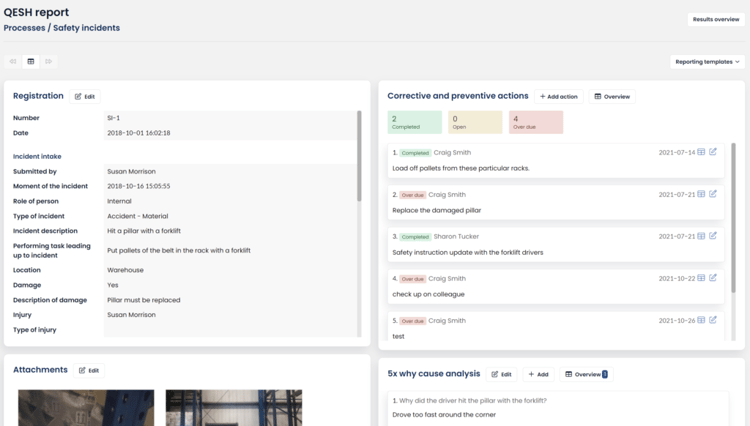 The immediate action is a recall of the off-spec batch which may have gone to many different customers. This is obviously very important. Note that AlisQI alerts the QA manager as being responsible for this task. IT is tasked with implementing a new datalogger program and installing the latest version of Windows. This greatly diminishes the likelihood of the computer crashing and therefore the expediency of having to manually create sample labels. However, this was still a weak link in the chain and has to be addressed.

AlisQI alerts IT, QA and other stakeholders to what they have to do as part of handling this complaint – and keeps reminding them of their tasks as long as these are registered as open actions. Upon log-in, anyone involved in closing the complaint will get a status overview such as the one below:

Once all the actions have been resolved the owner will close the customer complaint. This triggers a message to the QESH manager who has the final say in wrapping up the procedure which may include an assessment of the financial impact of the complaint.

Recalls on the rise

As we noted earlier in this blog, the amount of recalls is rising. The first most important cause for this rise is environmental regulation. To take the food industry as our example, each link in the supply chain must be able to identify the full traceability of a contaminated/hazardous product within four hours. The ERP system is the primary source for this information, but AlisQI strengthens compliance by capturing data for each step of the (compromised) production process.

Another cause of the rise in recalls is the complexity of modern supply chains which causes a destructive domino effect when just one supplier slips up. In 2015, a recall of cumin spice (contaminated by nuts) affected 14 companies, 100 brands, 153 individual products, and 756 products in different packages. Closer to home, insecticide found in Dutch eggs triggered a massive recall of egg products in 16 European countries and as far afield as China.

Your credibility as a supplier: Lamers HTS

Manufacturers rightly fear the consequences of these supply chain ‘tail events’ and will sometimes insist that first-tier suppliers automate their QM processes to give them, the buyer, greater insight into its component raw materials.

This happened to Lamers HTS, a supplier of high-precision production environments to the Dutch technology giant ASML, the world’s number one supplier of photolithography systems to the chip industry. Lamers ran its Quality Management on hundreds of Excel spreadsheets which meant it wasted many hours collating the detailed statistical reports demanded by ASML. It was ASML that recommended AlisQI which is now generating the required reports in minutes instead of many hours and days. AlisQI can be linked downstream with customers (as in the ASML use case) or upstream with suppliers so the Quality of raw materials coming through the factory gate is assured.

A large part of intelligence is anticipation, a readiness to adapt and to do better next time – qualities that we have built into the AlisQI platform. A modern Quality Intelligence system such as ours is not in itself a guarantee of Quality, but it is without a doubt a Quality hallmark. Suppliers know they have to up their game, and customers place greater confidence in you.

Simplify your ERP project by implementing a smart quality platform

The quality management modules offered by ERP vendors are not best-of-breed and customization means delay, uncertainty, and spiraling costs. Before going this route, consider leaving quality out-of-scope in your ERP project. This whitepaper illustrates how a smart quality platform might boost both your quality and your ERP project in one go. 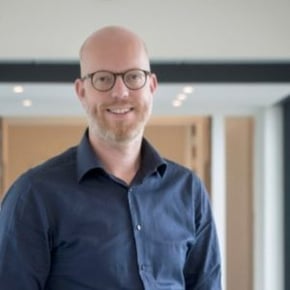 Top 10 problems with Excel in the laboratory

In recent years, I have come across dozens of homemade Excel and Access systems, and although the laboratories I visit are very ...
Start Reading
Gerben de Haan 11/24/2020 6 min read

Manufacturers have always hated waste. There was nothing moral about this; waste was seen solely as an avoidable cost, as a ...
Start Reading
Gerben de Haan 06/02/2020 3 min read

Quality Management is closer than you think

For many people, Quality Management is something far-off and remote. At least, that’s what they think. We might as well have ...
Start Reading